Summoning Help - Seti at the Docks 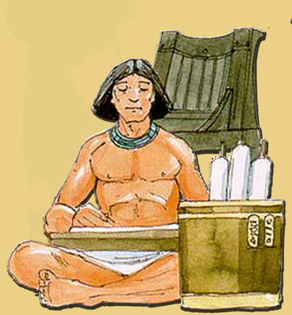 The situation at the town is becoming dangerous.  Migrating tribesmen have made their appearance - Seti stood a group of scouts off in the prior chapter, but he feels that there is power behind them, and they may be coming in force.  The nominal commander of the town's militia, Djedi - whom Seti has been coaching - does not want to believe it, and has refused to apply to the Royal Army for assistance.
While he does not wish to embarrass Djedi, Seti's duty is to his people.  He has decided that there is only one thing to do.
In this scene he is at the docks in Thebes, taking dictation as an itinerant Scribe - he who had held the title of 'Scribe of the Armies' for a number of years.
In this scene he has sent a message to Intef, his old army friend who is now Vizier of Southern Egypt.
.....and here he is.
"I need a letter for my wife, Master Scribe."
The voice, deep and soft, was above him. He looked up, squinting a little in the sun. A stocky man with a broad, intelligent face, was looking down at him with his eyebrows raised. He met the man's gaze and began to smile. "By all means, Master," he said. "Something to send the lady? A love letter, maybe?"
"That would be...interesting," the man said. "It may make her view me with less annoyance."
"Sit down Master," Seti said. "I have the perfect letter for you..." He drew a folded document from his scrip. "See if the phrases please you..."
The man took the sheet from him and scanned it. A sudden, intense frown was firmly suppressed and he sat back and read it again. His mouth twitched. After a moment he lowered the document and looked up. "Do you think this will work?" he asked.
"It always has worked for me," Seti said. "But then I've been fortunate most of my life."
The other lifted an eyebrow. "I will take it," he said. "It may well persuade her. Thank you." He paused. "Master Scribe," he said. "I have enjoyed talking with you, and I have some questions about this letter. Would you care to discuss it with me over a bite and a sup?"
"As disheveled as I am?" Seti asked with a grin.
"You look like a prince."
** ** **
"'Cram yourself into something that isn't a robe of state, leave your wig behind and get over to the docks'," Intef said. "What a way to summon an old friend!"
"We've been friends too long for you to take offense," Seti said.
"That is debatable." Intef eyed the rough cup of beer and then raised it to sip. "Perhaps I am naive, Seti, but I can't fight the conviction-odd, I know!-that you must have had some reason for summoning me so abruptly aside from the urge to indulge your strange  sense of humor by abusing me!"
Seti topped his cup from the jar of beer before him. "You already know, Intef-you have the message."
"Ah yes," said Intef.  "The message..." He drew it from the scrip at his belt and frowned thoughtfully at it. "Are you quite serious?" he asked.
Seti frowned and set his cup down. "How long have you known me? I'm as serious as death! I am surprised that you are questioning me!
Intef nodded.  "I was...simply curious, but as you command..."  He sat back and looked straight at Seti with an expression of bland inquiry.  "Should I wash my feet before you start kissing them?"
"What?  Give me that letter!" Seti snatched it from Intef's hand, opened it and read, scowled at the blank cover and then put it down with a shout of laughter. "Damnation!"
"I gather there was another message?"
"There is," Seti said. "It's in my scrip."